Twenty-three years ago, Calgary educator Gillian Kydd had a radical idea: What would happen if you took elementary school students out of their classroom for one week and placed them in a new, stimulating environment where their natural curiosity would inspire their learning.

Looking back now, it's safe to say Ms. Kydd was onto something.

From a single classroom at the Calgary Zoo in 1993, the Campus Calgary / Open Minds program, founded with the support of Chevron Canada, has skyrocketed into an award-winning, internationally recognized educational program that is reshaping how children learn and educators think about the future of teaching, across Canada and around the globe.

On April 7, the true impact of the program over the past two-plus decades came into sharp focus when the Campus Calgary/Open Minds (CC/OM) program celebrated an amazing milestone – recording the 100,000th student in the city to participate in the program.

Close to 200 people attended the commemorative event at TELUS Spark, one of 11 CC/OM sites, including trustees from the Calgary Board of Education and Calgary Catholic School District, site coordinators and volunteers, teachers, students and corporate sponsors, including Chevron Canada.

All representatives who addressed the audience spoke of the transformative impact of the Open Minds program and how it exemplifies education as a shared partnership involving all members of a community.

"What is so important to me about this program is that students get out of the classroom and really live within our community, seeing themselves as ethical, educated citizens who are entrepreneurial in their thinking," Nenshi said in a video message. "To me that is the most important aspect of education in an urban setting and that is what Campus Calgary/Open Minds does so well."

Former Open Minds student Maria Drvoklic spoke on behalf of the 100,000 students who have participated in the week-long program which is designed to inspire learning and improve the development of critical-thinking, problem-solving and writing skills.

In Grade 5 she attended Zoo School, which she recalled as "one of the richest learning learning experiences of my life." During her five days at the zoo, Drvoklic studied the tigers, helped feed the elephants and had many unique, behind-the-scenes experiences. She is now in her final semester of education at the University of Calgary, where she is an aspiring elementary school teacher.

"Open Minds taught me to value collaboration, connecting my learning to the real world," she said.

Rod Maier, Chevron Canada's manager of Policy, Government and Public Affairs, said the success of CC/OM, Chevron’s flagship social investment program in Canada, is the result of a multi-faceted partnership that has yielded benefits for everyone involved. 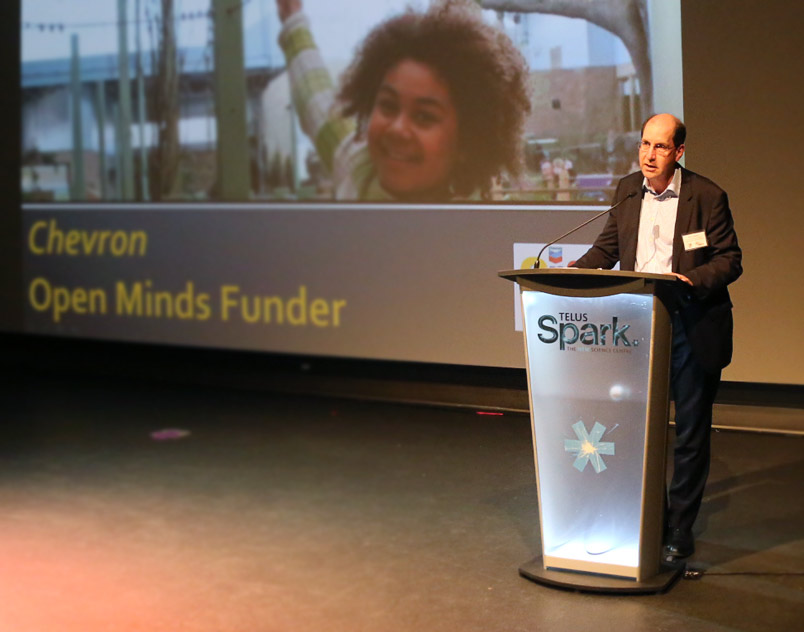 "Chevron Canada is proud to have been the initial funder of what is now Open Minds Zoo School, and to have been along for this amazing ride for the past 23 years," Maier said, noting Chevron now sponsors five Open Mind sites across Canada.

"A sincere thank you to the Calgary Board of Education and the Calgary Catholic School District; school board trustees, site coordinators, staff and volunteers; principals and teachers; parent volunteers and students – all 100,000 of you – for not just supporting, but embracing and sharing this program. It truly is doing together what we can't do alone."